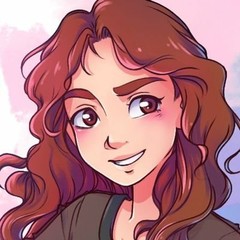 I work illustrating, designing and planning projects because it is what moves me inside. I want to contribute to this society of images my colorful, bright and warm vision.

[APPLIED STUDIES AND CAREER]
I am that kind of illustrator who say they don't know when they started drawing... Headstrong and perfectionist, I put myself in front of the paper and drew without stopping, unless I was watching animated films, cartoons or anime on TV. What I can really say is when I decided that all this wasn't just a hobby.

I launched into Fine Arts in 2013, beginning some intense and fruitful years.

I studied Drawing, Illustraion and 2D Animation in Animum (Malaga) where I also did my business practices years later, making art and animations for 2 shorts produced by the school (Crazy Sheepball and A Tribute to Wicked), and I spent my Erasmus in Poland, in a small city called Lodz, and where I discovered a land with a great tradition in 2D animation and stop motion.

In 2017, a Valencian publishing house called Edicions del Sud accepted the children's story we had worked on since 2013, which would also be published in Spanish, Colors. I continued working on projects of the publisher such as Maca la Tomaca, El Tresor de la Mariola and La Pedra de les Emocions until 2019.

I have also had the opportunity to collaborate with some video game startups in Spain, such as the Flocking Pets logo and icons.

All this would take me to my Final Degree Project, where I turned all my knowledges about drawing and animation to make a series of animated shorts that would later be chosen and acquired by the University of Malaga.

Today I work as an illustrator and 2D animator, in an animated series for Asociacion Con.Ciencia, Getting Together released during COVID crisis and a second one very soon, Ana' Secret, a 15' short against child abuse.